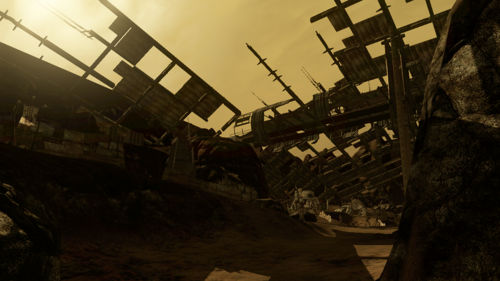 The Badlands is a sector of Tharsis, Mars. The area, described as "where terraforming went wrong", is a wasteland of jagged rocks and dead settlements.

The Badlands are home to the Marauders, descendants of Ultor Scientists from the first Red Faction who appear in large numbers at night. Ruins of Ultor buildings and mines can be found in the area. Deep within The Badlands sit ghosts of the past that aren't willing to go quietly into the night. The Earth Defense Force does not like going out there, but still maintains a substantial presence in the region.

The reason the EDF is so intent on controlling this area is because of the nanoforge, a powerful piece of Ultor technology that has the ability to create a near infinite supply of nanites, thus tempting the EDF to weaponize it.

The Badlands have little to no civilian population, but also contain the largest EDF outpost on Mars. The Red Faction also have their largest safehouse located to the east among the mountains, which serves as a makeshift central command for them. Throughout the center of the map, there is nothing but barren wasteland,and Marauders.

While the EDF obviously has a presence in the area, having their largest outpost located squarely in the middle of the map, another large threat is the Marauders, which seem to be even more concentrated in the barren wastes. The reason being is because they have a large city and temple site located on the opposite side of the irradiated zone.

A number of Easter eggs can be found in the Badlands, including: