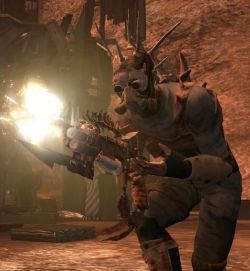 A Marauder holding the Shotgun.

The Marauders are a mysterious people that appear in Red Faction: Guerrilla. They inhabit the Badlands sector of Tharsis, Mars. They are the descendants of Ultor scientists from the first game in the series. They are hostile toward all other groups, happily killing members of both the Earth Defense Force and the Red Faction.

The Marauders appear to have been mutated by nanite injections administered by Dr. Axel Capek. These injections seem to have turned them violent. They worship Capek as a god, having built many shrines dedicated to him and the Ultor Corporation.

The Marauders simply refuse to interact with other human beings in a peaceful manner. There are only two Maruaders that speak clearly throughout the game. The rest never speak, only grunting and yelling at Alec Mason or each other. Though it wouldn't quite be true to say they are unintelligent, they are certainly not at the same IQ level as their ancestors from fifty years ago.

Occasionally they can, with no prompting from the player, be found attacking EDF soldiers and property, sometimes inadvertently assisting the player. But it's best not to get in their way when they are carrying out these actions, or they will focus all their efforts into eliminating the player first.

By nature, they are scavengers, salvaging what they can from the inhabitants of Mars that are foolish enough to stray into the Badlands. There are several audio diaries that indicate that the recording parties met their end at the hands of the Marauders. The Marauders' weaponry tends to be cobbled together from junk that they find around them, and occasionally from stolen EDF and Red Faction technology. Their vehicles are as wild and feral looking as their creators.

The Marauders are generally perceived as mysterious, brutal savages. It is entirely possible, however, that they simply hide their intelligence from the outsiders they so strongly loathe. At least one Marauder has been shown to be highly intelligent. The Marauders' technology is also an indicator of their intelligence; while it is largely formed from stolen or scavenged parts, the tech can at times be quite advanced.

All the Marauders wear masks or helmets. This is possibly due to being driven out of Capek's labs and living on the surface of Mars before it was properly terraformed; the masks and helmets could be the remains of improvised gas masks and pressure suits. They also serve to enhance the Marauders' intimidating appearance. However, under the masks they look like ordinary humans. In addition to intimidation, the armor may also serve as radiation suits, which would explain as to how the Marauders are able to cross the Irradiated Zone without death.

In addition to attacking Alec Mason, at some point during the story the Red Faction will ally itself with the Marauders to achieve an objective.

Prior to the events of Red Faction: Guerrilla, a Marauder named Samanya rescued Dan Mason and Hugo Davies from an EDF prison camp in Mariner Valley. She later defected to the newly-revived Red Faction. In Red Faction: Guerrilla, the Marauders were hostile toward the Red Faction. However, their leader, Vasha, was forced to establish a truce with the miners to destroy the Hydra. During the attack on the ship, Vasha was killed, and the terms of the peace agreement -- the giving of the Nano Forge to the Marauders -- were not honored; this may have led to a renewed enmity between the Marauders and the miners.

The group's role in Red Faction: Armageddon is not yet known.