Parker is a character who appeared the original Red Faction and made a cameo appearance in Red Faction: Guerrilla. His first name is not known.

Parker is a notable figure in Mars's history, having assisted in the Earth Defense Force's arrival on Mars, the restructuring of the villainous Ultor Corporation and the finding of a cure for the Plague. 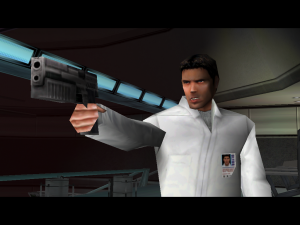 Parker with a pistol in his scientist uniform.

Parker was born in the mid-21st century. Both of his parents "had [his] life all scoped out," wanting him to enroll in Harvard. In an act of rebellion, Parker instead signed up to work for Ultor as a miner. It was this job that exposed him to the brutality of the Ultor Corporation. After witnessing the murder of a fellow miner, Parker joined the Red Faction and assisted them in stopping Capek, curing the Plague, and liberating the miners.

Parker was not a key person in the rebellion immediately, but as time went on he proved himself to be more and more useful, even earning the attention of Eos herself. He is extremely passionate about discovering the mysteries of the plague, and sometimes his temper gets the better of him. Nevertheless, it is clear to his allies and former oppressors that he is instrumental in the uprising.

In Red Faction: Guerrilla, the Tharsis region is separated into 6 distinct sections, one of which is named Parker. Parker also makes a cameo appearance as the Old Coot near the Mohole.

I can't believe how stupid I was. Yeah, 'Come to Mars, Help Make a New World!' How could I have believed that crap? I remember laughing at that stuff with my friends. We'd drive up to Chicago and do the big city. We could always tell we were in the wrong parts of town when we started seeing prop-balloons floating over the streets, blaring out corporate BS. You'd hear incredible lies from the Army, Merc Corps, PDNC, Ultor -- all the big orgs that wanted to put warm bodies in bad places. You wondered who'd buy those lines and sign up. Now I know.

Jake, you could see doing it. He signed up for the Navy right out of high school. He had no choice, really. When you barely make it out of HS and there aren't any jobs, you take what they offer you. He's on a Navy cruiser out in the Belt somewhere, last I heard. It's like the Wild West all over again, he says. Prospectors, claim-jumpers, company goon squads, you name it. Life's cheap out there and it's a seller's market. He'll end up sucking vacuum before his tour's over.

I always thought I was different, better than most. Mom and Dad -- Dr. and Dr. Parker, if you please -- had my life all scoped out. Private schools, tutors, prep school, Ivy League for undergrad, then grad school and on to a glittering career in academia. They had me running their little maze. Lots of twists and turns, but only one way it could possibly end up. Who'd have thought their lab rats would be the only ones to reach the cheese?

I just couldn't take it anymore. Never being able to separate what I really wanted from what they'd trained me to want. Not knowing where I began and they ended. No achievement was praiseworthy. When the acceptance letter from Harvard came, they took it like no big deal, just an expected turn in the maze. I went nuts. I ripped up the letter and stormed out of the house, hardly able to see straight. I wanted to do something that wasn't another item to mark off on their progress chart. Signing up for Ultor's mining operations on Mars sure fit that bill. I drove downtown, saw one of their recruiting offices, and it just clicked.

It was like my brain was running on autopilot. I walked into the office and it all went so smooth and fast. The whole place was designed to ooze inside your head and let you know Mama Ultor was gonna take good care of you. Thick, neutral carpeting, bland, gently curving walls, soft lighting, a friendly helper to lead you through the whole process. If Hell opened a tourism office downtown, they'd do it just like that. Maybe they already have.

I was still in a daze when they took me to the shuttle and strapped me into a shallow indentation in the floor. There were dozens of other new recruits in the passenger compartment, all cocooned into dents of their own. After the shuttle took off for Mars, I finally snapped out of it. When freefall hit, I unbuckled and dodged floating globules of vomit (people, I realized, don't properly chew their food) and made it to the door relatively unscathed. I opened it, but before I could step out of the room, the toughest-looking guy I'd ever seen filled the doorway and told me to get back in or he'd rip me a new one. I stepped back inside and he slammed and locked the door.

Landing was another bad omen. Strapped into our dents, watching the puke blobs float around, wondering how many of them were going to land on you, hoping they hit the people to either side of you instead. The sounds and smells of planetfall were beyond description. It was a good introduction to life in the mines.

We were herded out of the ship and into the new arrival processing area. I've got to hand it to Ultor -- they let you know your place in the food chain right away. We were shoved into a tile-floored chamber, told to strip and then fire-hosed from sprayers in the walls and ceiling. People were flopping all over the floor. Once we were thoroughly soaked, stunned, and disinfected, they issued us uniforms. Mine didn't fit right; no one's did. Someone tried to return his and get a different size. He was beaten by security guards and dragged away to the infirmary. The rest of us just huddled a little smaller and went where they told us to.

The barracks are a nightmare. Narrow bunks are stacked in dank rooms, trash litters the floor, graffiti covers the walls -- every horror story I'd ever heard of worker barracks has come to life. Turns out everyone shares a bunk with another miner. He sleeps while you work and you sleep while he works. The other eight hours, I guess the bed lice get a rest. It's pretty gross, but you get used to it. I don't even want to think about the trough urinals and communal showers.

Drugs spread like mold in the barracks. It's hard not to give up in this place. Tossing in the towel and paying for a few hours of oblivion really appeals to some. Giving up's not for me, but lots of the people who arrived with me are already half brain-dead. Ultor's gotta know about it, maybe they even get a cut. Zombied-out workers don't complain as much, so I can see Ultor having a hand in it.

The only good thing about the work is that it gets you out of the barracks. Those envirosuits are hot as hell to spend eight-hour shifts in, though. To make it extra nice, three workers share each suit, one per shift. The suit's sweaty, hot, and smelly when you climb into it, and it's worse when you climb out. They spray them down between shifts, but it doesn't do much good. Once you're down in the mines, it's pure grunt work. Smashing rock out of walls, trying to follow a vein of noachite when your faceplate's all fogged up from the humidity inside your suit, stupid bots ramming into you when they grab chunks of ore -- I'm surprised more miners don't go berserk during their shifts.

I don't know why Ultor has human miners doing this. It's gotta be cheaper to have bots do it, and they certainly have enough bots. I've asked around, but no one knows. Most don't seem to want to think about it, maybe figuring they'd be out of jobs if Ultor decided to use bots. Or maybe they're just too zoned-out or discouraged to care. There's something soul-draining about doing a job that doesn't seem important. There's a cancer here, eating away at us, hollowing us out from the inside.

Seems like everything that can go wrong around here does. Everyone's at the breaking point. Fights are erupting all the time. A guy got knifed yesterday in my barracks. The argument started over nothing, escalated into shouting and pushing, a blade came out, and then the guy bled to death right on the floor. The guards didn't even investigate. It seems to be happening a lot lately.

We're scared and angry. It's not just the fights or the work or the living conditions. Something else is happening to us, beating us down. Miners are getting sick. Not flu-sick but something worse. Every day, dozens of miners collapse, in the mines and in the barracks, without warning. One minute they're fine, the next they're on the ground, writhing in pain or sometimes unconscious even before they hit the floor. And there's something wrong with their faces too. They seem puffy or stretched. Some say that they've seen sick miners whose faces are bulging or pulsating. People call it the Plague. Everyone's on the verge of panic.

Ultor denies there's any problem. First they said that it was just a stress response on the part of weaker individuals. When everyone got done laughing and then screaming about that one, they came up with a new rationale. They now claim that it's a Martian virus, infecting miners by some unknown means. That scared people; did Ultor think we'd be reassured to hear that there's something in the air that's killing us? There were riots in a few of the barracks after hearing that. Ultor claims they're doing everything they can to combat the virus. Their doctors and technicians are all over the barracks and even in some of the mines, giving everyone shots and pills. They say that their efforts are all that's keeping the virus from killing a lot more.

Lately, there've been pamphlets slapped up on the barracks and cafeteria walls. They're calling for miners to go on strike against Ultor, to refuse to work. Some of the flyers even urge us to attack the guards, to get back at them for all the years of mistreatment. No one knows who writes them. The pamphlets are signed 'Eos.' Some say it's the name of a group; some say it's the name of a woman who's trying to stir up the miners.

The security guards tear down the pamphlets as soon as they see them, but the damage has already been done. Dozens of people read them. In a few hours, hundreds of miners are talking about the latest pamphlet. People are grumbling, glaring at guards, and openly muttering about a strike or worse. It gets uglier every day.

I don't know what to think or do. I just want to get out of here alive, somehow. Harvard sounds better all the time.