The Plague is a result of the nanotechnology experimentation conducted by the Ultor Corporation and, more specifically, Dr. Capek. The disease was featured in Red Faction. 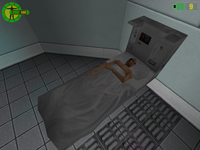 Plague victim who has just collapsed. 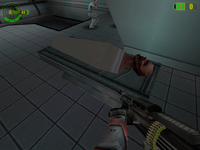 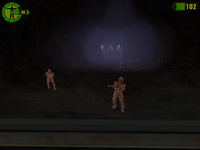 Though the exact nature of the Plague is never explained in the game, fans have speculated about its progression.

The Plague results from human exposure to nanites created by Capek. It is thought that when such nanites enter a human body, they begin to attack the brain. The attack stops all non-essential neuro-muscular functions, causing the victim to fall to the ground and making them unresponsive.

Curing the plague is fairly straightforward; in Capek's own words, all that needs to be done is stop the replicators. This is done by administering an antidote -- likely a chemical solution that interrupts the nanites' replication process. Once the replicators are stopped, the remaining nanites will eventually stop operating, and the body will slowly return back to normal.

Through out the whole missions of red faction there are some graffiti saying "the plague is coming for you" it maybe a reference for upcoming missions and enemies.