Warlords is a Red Faction series map that features two opposing bases nested in a canyon. Warlords has the distinction of being the only map in the Red Faction series to be featured in some form in three out of four major releases.

Warlords made its premiere as a DM map in the PS2 version of Red Faction. Here, the map was a popular choice for split-screen multiplayer and bot matches. This original incarnation of Warlords featured two neutral-colored bases inside a large canyon with an empty middle section.

When Red Faction was released on PC, with it came a new and improved CTF version of Warlords. This went on to be arguably the most popular CTF map in the game, and is still a popular choice for public servers and competitive matches today. In revisiting this map for play in CTF, the developers made a great deal of changes from the original PS2 DM version. In this incarnation, the bases are color-coded to each team, and are much larger than in the original. The addition of bottom and top tunnels, as well as the center bridge also make the map significantly more interesting to play. The bottom tunnels of Warlords connect the ground and second floors of each team's base with the respective locations in the opposing base, and runs straight under the center of the map. The top tunnels link the top sections of each base, and also connect with the bridge in the center of the map which houses the game's superweapon, the Fusion Rocket Launcher.

The PS2 version of Warlords contains the following items:

The PC version of Warlords contains the following items:

While the PS2 DM version of Warlords was a hit among split-screen multiplayer gamers and in bot matches, the PC CTF version of Warlords in the original Red Faction is where the map really shines. Long regarded as one of the best and most well-balanced maps in the game, Warlords is still a popular choice for play in both public servers and competitive matches to this day.

Due to the inclusion of RED with the PC release of Red Faction, many players have edited and customized Warlords, or even made their own version from scratch. A few examples of these Warlords-inspired custom maps are shown below. 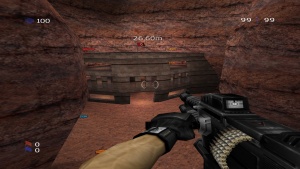 In Red Faction II, Volition chose to include the original DM (PS2) version of Warlords in the bot-match game mode, as opposed to the CTF (PC) version. The only notable differences between this version and the original RF1 PS2 version are the items which spawn in the map.

While Warlords was included in the bot-match portion of the game, the lack of real multiplayer in RF2 kept many players from spending much time with the game. Still, the map was well received by split-screen multiplayer players, and those who chose to play bot-match.

With the third game in the series, came the third incarnation of Warlords. When this was announced, fans rejoiced at the prospect of playing a classic and favorite map of the series in the series' newest game. As it turns out, this new Warlords was vastly different from what fans had come to recognize as Warlords. This version featured no tunnels, and instead had sculpted rock comprising the majority of the map's environment. While the base layout of the map remained, for the most part the map is entirely new.

Warlords has been replicated and/or reworked in numerous games over the years. Below are a sampling of these remakes.