Damage Control is one of the gametypes found in Red Faction: Guerrilla.

Damage Control is similar to the Onslaught gametype for Unreal Tournament 2004 as well as the King of the Hill gametype found in many games. It consists of 3 control points or capture points around a map which must be destroyed and then reconstructed with the Reconstructor (shown right). Once the control point is rebuilt, your team owns it. Points are given for the amount of time the point is held. The objective of the gamemode is to aquire the set amount of points before the opposing team. In this gametype, frags do not gain you or your team points. To aquire points you must hold control points.

This Developer Blog section was written by Luke Schneider of Volition Inc.

The original design for Damage Control comes from the days when David Abzug (now a Lead Designer on a different project) was leading multiplayer. Back then, it was just known as our version of the classic King of the Hill. The basic premise was as follows: Targets (small structures) spread throughout a level give teams points after they’ve destroyed and repaired them. That premise has not changed, but the details of the mode materialized and evolved over a long period of time. 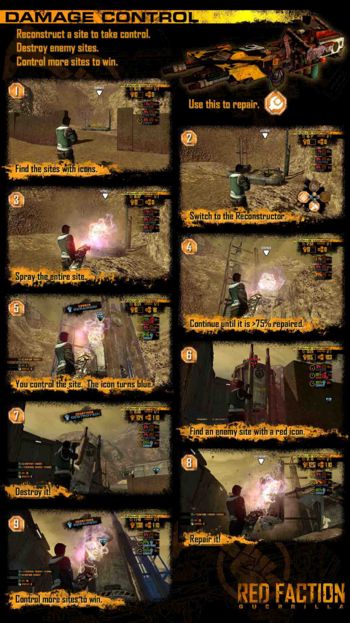 The first and largest obstacle for the mode was actually getting repair fully working and stable. Our destruction system is very complex under the hood in order to bring (potentially) thousands of objects to life at once without melting your console’s CPU and GPU cores. Adding repair on top of that posed many technical and design issues, along with the issue of making the reappearance of a structure look awesome.

Once our repair feature was stable enough to test the game mode, we had to look at how the Reconstructor worked since it would affect the types of structures that get used as targets. We experimented with a couple different configurations along with many ranges of settings before settling on the Reconstructor’s current balance, including an overheat feature instead of traditional ammo.

Damage Control uses 3 targets for every map, but we briefly experimented with other numbers as well. With only 2 targets, the teams tended to trade targets but neither team seemed to really be winning at any one point. With more than 3 targets, the action became too spread out while defending a target becoming less and less important, particularly with a smaller number of players.

For the interface, we were having serious issues in play tests with players not knowing who controlled each structure and when structures we’re repaired or destroyed. The team-colored object outlining was something we had planned for a while, but it didn’t become functional until a month before the Beta was submitted to Microsoft. That helped immensely, but we reinforce it with messages at top of the screen, colors on the target list, and voice messages as well.

Damage Control was shaping up nicely at this point, but we still had to balance the scoring and encourage teams to do more than grab two targets and stand pat. The scoring was really a matter of making sure the score never surpassed 1000 points (we only have 3 digits in our scoreboard). So we give a point every 2 seconds for each target held. In order to encourage teams to go for the kill or have a better chance of a comeback, we double the points while you control all 3 targets at once. Even holding them all for a few seconds can make the difference between a win and a loss in a tight match.

And finally, the name for Damage Control came from Clint Bundrick, another RFG Designer. Sometimes naming game features can be difficult and controversial, but “Damage Control” was fairly obvious even though we had many great potential names to choose from.

Even with the evolution of Damage Control having come so far, we’re still examining further balance and general issues with the mode. These include the Rocket Launcher being overpowered in the hands of a skilled player, voice being used too often on some levels, some target structures working better than others, and new players not knowing how to use the Reconstructor.

The full developer blog can be found here.