NOTE: This tutorial was originally posted on redtechnologies, which is no longer available.

What are Smoothing Groups?

Smoothing groups can be used to make polygon edges of "rounded" geometry appear softer. A typical use would be a pipe like on the picture below. 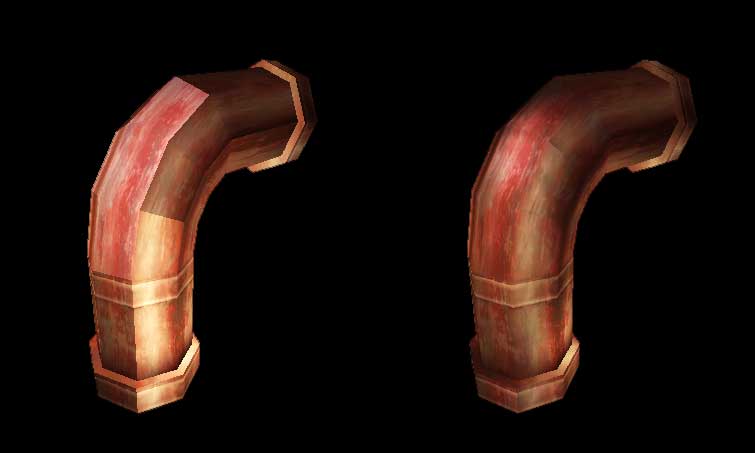 Actually, smoothing groups are just lighting effects. Normally every face of a brush is lit separately resulting in an ugly facet effect like on the left picture. What smoothing groups do is just blending the light between all faces that are part of the same group.

For this tutorial simply create a room with a sphere shaped brush in the middle. Because it is a lighting effect you have to put a light somewhere near the sphere. Rebuild your level and calculate lighting. You will clearly see the facet effect on the sphere.

Smoothing groups are managed with texture-properties for some reason so go to texture mode first (shift-T). Select one face of the sphere and press shift-S to select all faces of the brush. Press ctrl-P to bring up their face properties.

See the list in the properties window? These are our smoothing groups. Check the first group. Now all the sphere's faces are part of this group. Rebuild your level and calculate lighting again. You should now see a much smoother sphere!

Please note that the effect doesn't work perfectly every time. Lighting is a complicated thing to render and sometimes you will see ugly edges even though you applied smoothing groups to faces. In some rare cases RED even crashes when you use groups for too many faces or complicate polygon structures. 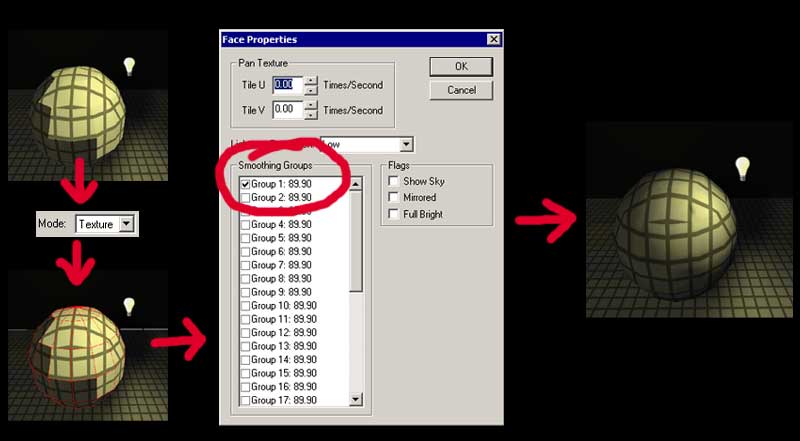 What are those numbers?

The huge list in the face properties window is actually not neccessary. Mostly you only need the first group for the whole level. Theoretically you can use multiple groups for faces on one and the same brush. That way a hard edge stays between two smoother areas. This doesn't work very well in RED though.

The 89.90 stands for "89.90 degrees" which means that only polygons that meat at a higher angle will be smoothed. I think this value can't be changed in RED]. I wouldn't care that much about these numbers also. They only seem to be relics from 3D modeling programs where smoothing groups are used much more frequently.