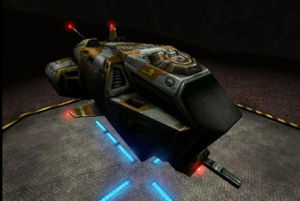 The Aesir is a vehicle in the original Red Faction.

The Aesir Fighter is an extremely agile and ridiculously fast aircraft that can be used in tight situations against all manner of foes. It offers both ULT-AR4 Steeleye Tandem Warhead heat seeking missiles as well as an ULT-8CG 30mm 8 barrel gattling gun. Skilled pilots will use both weapons as well as the vehicles inherent ability for maneuvering to demolish any adversary. The fighter is seen twice throughout the game and you will indeed face opponents in other fighters (but only while you yourself have the ability to fly as well), but they shouldn't prove to be much of a problem unless you let them charge you and get you turned around. Fend them off with missiles and strafing maneuvers and if they get to close unload the gattling gun on them until there isn't anything left but dust and debris.

Milk it for as long as you possibly can because using it is just fun. Watch out for enemy fighters and rail-gun wielding mercs though, because they can tear your armor down in a jiffy. If you're facing off against on-foot opponents stay low to the ground hitting them with bullets and trying to run them over, make sure to strafe left and right to avoid the shots. Also use your environment to your advantage by ascending behind the cover of a girder and then swooping down at them at high speeds. If you're facing off against enemy fliers just don't let them get behind you because they'll unload on you before you can get them in your sights again.