This article is regarding Red Faction 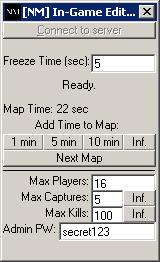 The user interface of In-Game Editor 3.

In-Game Editor is a Red Faction server tool released by the development team Time will Tell in February 2008, and when the [TwT] developers became NebulaMods, re-released in March 2009. In-Game Editor expands on the previous Endgame Editor release, offering all functions as its predecessor with the additions of a few more game settings, such as max caps and kills. IGE also supports a function to completely remove the map timer, a feature great for servers hosting a single run map.

After the game server is launched, the server admin launches the ige.exe application. When "Connect to Server" is clicked, IGE will scan for the game server. The following servers are supported:

Once attached to the server, IGE loads the settings from the server and places them on screen with the option for modification.

In-Game Editor edits the server process's memory directly. IGE does not connect through the UDP protocol. All settings are completely memory-based.

IGE offers no functions that would provide an advantage to any specific team in a competitive situation.