MakeVBM is a tool used to create VBM files for use in Red Faction PC. VBMs are animated or single-frame 2D bitmaps, in a proprietary Volition format.

The source input for MakeVBM is one or more TGA Targa images, either 24 or 32 bit with alpha.

The first step is to get your TGA files in one place, and name them correctly. MakeVBM requires TGA sequences to be named like so:

“name” can be any prefix you like, but it must be followed by the “-XXXX.tga” ending. Once you have your files together, decide what color format your VBM will use.

While all VBMs use 16 bits of color, that 16 bits can be broken down several ways. The output VBMs can be in one of four color formats. The numbers represent the ARG and B channels (alpha, red, green, and blue).

Next, decide what framerate the animation will need, measured in frames-per-second.

When you’re ready, open an MS-DOS Prompt (called Command Prompt in Win2000), make sure “makevbm.exe” is on your path, and go to the directory where your frames are located. Then type:

Included with the MakeVBM utility is a series of example frames named “pow-XXXX.tga”. These are the source frames for the invulnerability skin effect in RF PC.

This sequence uses 565 color mode, at 8 frames per second. To create that VBM from those frames, I would type:

This would create “pow.vbm”, which the game can now use.

When everything is run correctly, the output spew looks like this: 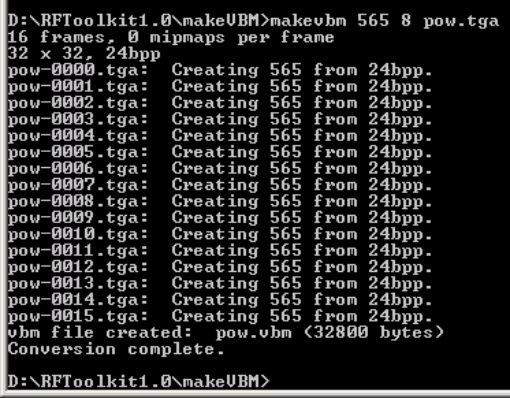