NOTE: This preview was originally posted on July 27, 2001 by Orange on Red Faction Watch, which is no longer available.

My own personal experience with level designing in an FPS game isn’t all that extensive, but I can say that I know more about it than any of my co-workers that were with me when we made our trip to Volition on July 16, 2001. However, I don’t think that RED (Red Faction’s Level EDitor) will be much of a problem for them to learn or for any of you reading this. Hmm.. well.. maybe I shouldn’t say that. I do know that many of our viewers have IQ’s that are equivalent to that of a large boulder. For most of you, though, it shouldn’t be a problem, I’ll talk about that some more later. They key areas I would mainly like to over are as follows: the interface (including the way the engine works with it), the ease of use, and the built-in features. So, um.., brace yourself, here goes.

When you fire up RED for the first time, you’re going to notice right away that level designers that have used past level editors from other games like UnrealED and Worldcraft have provided a lot of input in to how this level editor should be. According to Nathan Camarillo (the chump who demoed RED to us and the author of such maps as The Lobby and Warlords), Chris Helvig, a programmer at Volition took a TON of input from him and the other level designers during development... and it shows. One of the things I like a lot is that all the buttons are text based. I find that lately with editors they’ve been going more and more in to using different icons to represent certain actions. This gets very annoying as now, instead of just reading what the label is, you have to learn what the icon represents (which is not as easy as it seems it should be). By going with a text-based button interface, things are then much more simplistic for the designer. However, the interface isn’t just a bunch of text on the screen, there are many other things that correlate with it, I’ll go over these more in the built-in features section later. Heavy interaction in the editor is handled by keystrokes and hotkeys. This is both a good and a bad thing. Good being that it will be so much faster once you learn all the keys, but the bad thing is just that: you have to learn all the keys. Never fear though, Volition has of course provided us with the option of using mouse-clicks either from menus or toolbars to do just the same actions. Volition always gives us what we want! Yay! 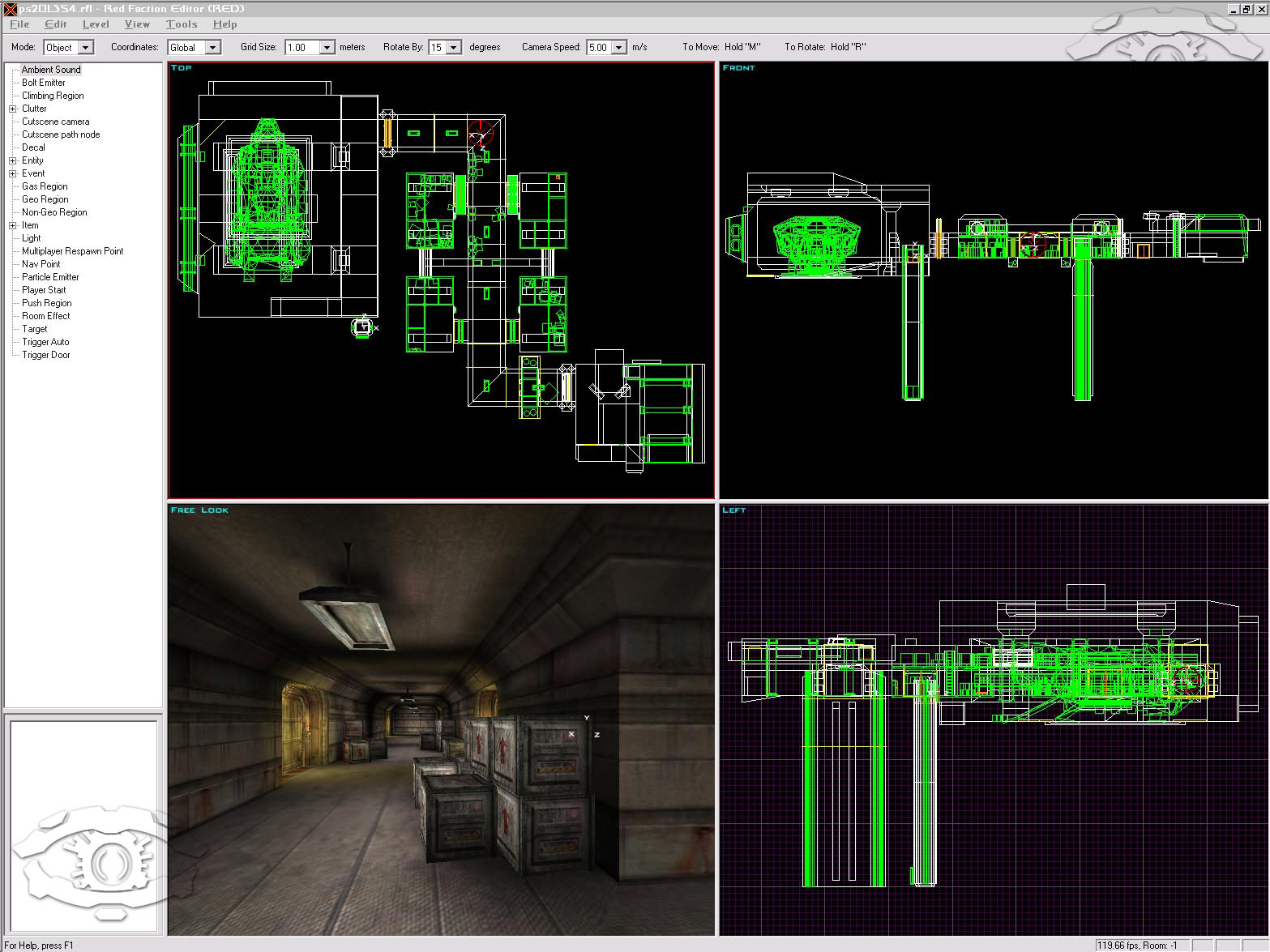 Here's the basic interface of the level editor. The level shown is actually one of the levels that appears in the PS2 demo, but also in the full version of the game.

The editor's interface itself consists of 4 main windows: your usual top, side, and front views, and then your rendered perspective/fly-through view. The perspective view in the game is great though. It renders the lighting, particles, and objects the way they'll appear in game. It does just about everything you can do in-game except I don't think you can actually perform your "events" in it. I'd have to get back to you on that. However, it's very cool and although similar to other games, has some very things about it.

Now, if I had to compare how the GeoMod Engine compares in level design with any other engine, I would probably say it compares to the Unreal Engine the most. The engine itself is of a subtractive type. Like in the Unreal Engine, you cut objects out of a whole “virtual world” and then add objects in from there. For instance, say for whatever reason you wanted to make a large cube shaped room with a floating box in the middle. You wouldn’t go about doing this like you would in some other engines by adding a box on the outside and then putting another box within it, while closing off all holes and whatnot. In the GeoMod Engine, like the Unreal Engine, you would “cut” one large box out of a whole, and then “add” another smaller box in the middle. This way is much easier to do and also just tends to make a lot more sense, being that things like “clipping” do not exist when you do it this way. The engine is definitely ideal as with GeoMods you can cut in to the world anyway, so it would make sense that the world is virtual. I'll come back to how you make the GeoMods work in the features section, which I think I'll do now. Oh wait, no, got to save the best for last. I think I'll go to ease of use now instead.

This is my key concern with RED as I'm not the greatest level designer in the world. I want to be able to learn how to use the level editor easily, but also so I'll be able to do a good job. Obviously the interface which I went over above really makes it easy to use, however, Volition has done a lot more than just that to make it easy for us. First off, all the tools that you will use to make a level are self-contained with the editor (Particles Editor, Texture Browser, UV Unwrapper, etc.). This is good so that everything is in one place so you don't have to have about 10 applications open at once when trying to do one simple task. Also included for easy use is a really advanced grouping system. Objects can either be made one as a group, or they can actually be made in to their own object. It's really you choice as to how you want it to look. Depending on which you choose, the object will blend to the level differently with different tools that are used in the editor. 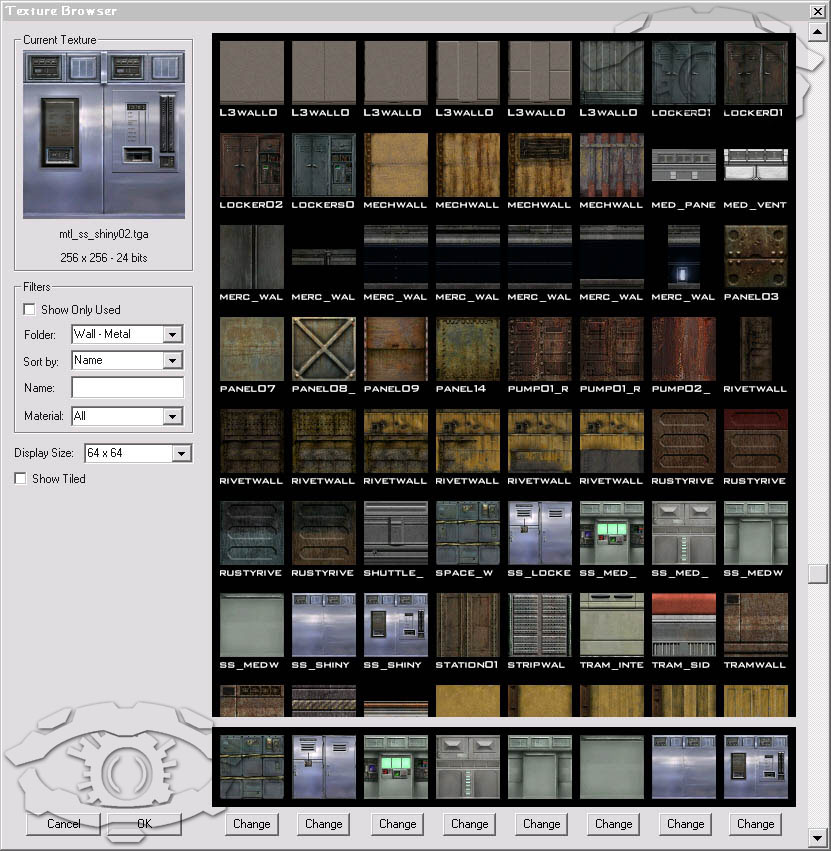 Here's a glance at what the texture browser looks like.

While I'm showing you the texture browser, notice the bottom row where you see all the buttons that say "Change". That is where you can specify favorite textures so if you find certain textures you like to use a lot, you can come back to them quickly and easily. This is very important because there are a LOT of textures in Red Faction and when you'll probably be adding your own too, it just keeps adding up. We saw when we were there how difficult it was if you didn't use favorites: Nathan Camarillo (Level Designer for Red Faction) was making a level and knew just what texture he wanted, but he couldn't find it. He spent about 5 minutes looking through all of the libraries looking for it but still couldn't find it. Thus, a thing like favorites and customizable hotkeys are vital for easier use.

Creating a destructable environment in other games in the past has needed a bunch of tedious scripting work to do a not-very-cool effect. With the GeoMod engine, it's easy. All you have to do in RED, is create your object from a brush, make a "GeoRegion" over it (an area defining the softness or hardness of the object). This is done through a simple properties window. In game, the effect is awesome. Depending on what you said the hardness to, the object will break a certain way. Someone asked me recently if you could make an object that appears to be solid rock break as easily as glass would in the game. My answer: I imagine so, it seems easy enough. :)

Last but not least, Volition is currently planning on including extensive documentation along with the editor. If this makes it to the final game or not, I don't know. I certainly hope so, though. I mean, with their past games that have included editors, namely Freespace 2, they included killer documentation that just about anyone could understand. I'm definitely hoping that Red Faction will be on this same level. Volition has always been good with documentation in the past and they might even include documentation on how to MOD their game. That would be ultimately cool. So, yeah, the ultimate ease of use test will to see if this documentation is helpful. If the documentation isn't helpful, we can complain a whole lot to Volition for no reason at all, or someone from the community who's figured it out could always write one too. Orange has answers aplenty!

RED has a ton of built in features so this section of my article will probably seem almost like a list. I will try to not make it just that, though. Actually, some people might prefer that so I'll just kindof do both. I'll put a list up then briefly describe each.

Yes, I know I did a really lame job on listing out the features for you, but you get the basic idea. There are many more features in the editor that I probably just forgot about. Besides, more information will be coming out in the near future on the editor, anyway, so never fear. You will know much more soon!

You read this far?!

It's already been decided (not by my own will) that my first level ever will be a giant picture of Todd Miller (Volition webmaster whom the Goths don't seem to like) with lens flared eyes, green particle effects coming from the nostrils, and a moving mouth object using a Push Region (hmm.. maybe I should've talked about that... nah). It will be the best mission ever released for any game, you'll see why in the following paragraph.

Finally, I must finish the article with a quote. Now, Nathan has asked me not to quote him, but I must close with a quote of his. Here goes: "Any map made with this is guaranteed to be fun!" You heard it here first! It's a guarantee straight from a level designer for the game!